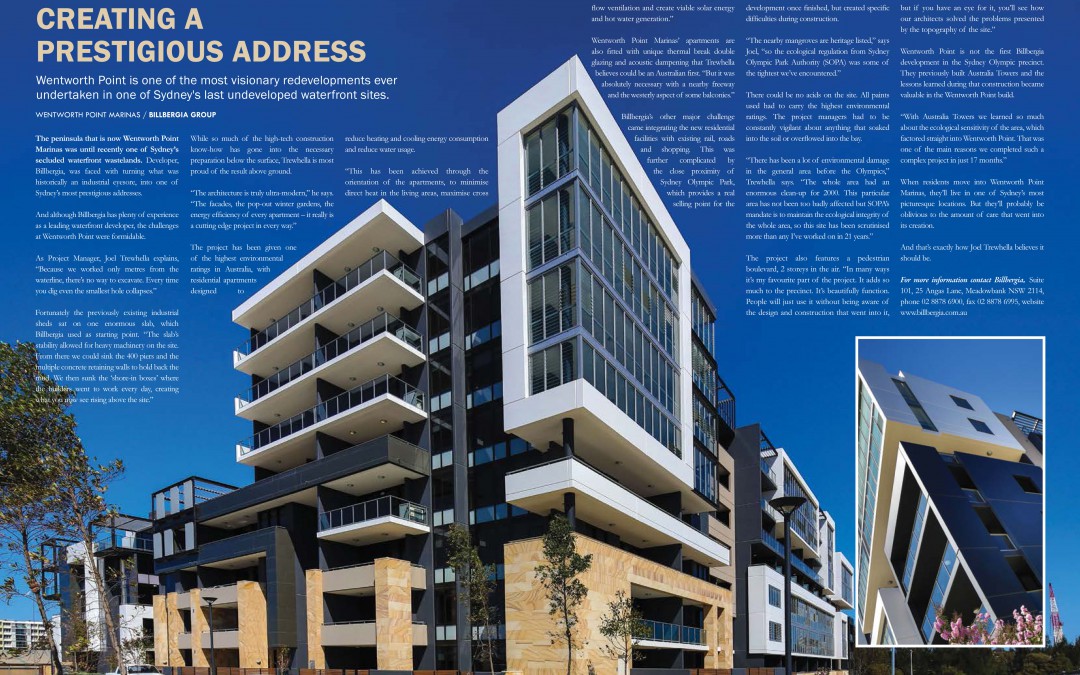 We are thrilled to be included in the upcoming April 2013 issue of The Australian National Construction Review magazine. Our Quarterdeck building at Wentworth Point Marinas has been chosen for a NSW Project Feature. Read the full article below.

CREATING A PRESTIGIOUS ADDRESS
Wentworth Point is one of the most visionary redevelopments ever undertaken in one of Sydney’s last undeveloped waterfront sites. (Wentworth Point Marinas/Billbergia Group)

The peninsula that is now Wentworth Point Marinas was until recently one of Sydney’s secluded waterfront wastelands. Developer, Billbergia, was faced with turning what was historically an industrial eyesore, into one of Sydney’s most prestigious addresses.

And although Billbergia has plenty of experience as a leading waterfront developer, the challenges at Wentworth Point were formidable.

As Project Manager, Joel Trewhella explains, “Because we worked only metres from the waterline, there’s no way to excavate. Every time you dig even the smallest hole collapses.”

Fortunately the previously existing industrial sheds sat on one enormous slab, which Billbergia used as starting point. “The slab’s stability allowed for heavy machinery on the site. From there we could sink the 400 piers and the multiple concrete retaining walls to hold back the mud. We then sunk the ‘shore-in boxes’ where the builders went to work every day, creating what you now see rising above the site.”

While so much of the high-tech construction know-how has gone into the necessary preparation below the surface, Trewhella is most proud of the result above ground.

“The architecture is truly ultra-modern,” he says. “The facades, the pop-out winter gardens, the energy efficiency of every apartment – it really is a cutting edge project in every way.”

The project has been given one of the highest environmental ratings in Australia, with residential apartments designed to reduce heating and cooling energy consumption and reduce water usage.

“This has been achieved through the orientation of the apartments, to minimise direct heat in the living areas, maximise cross flow ventilation and create viable solar energy and hot water generation.”

Wentworth Point Marinas’ apartments are also fitted with unique thermal break double glazing and acoustic dampening that Trewhella believes could be an Australian first. “But it was absolutely necessary with a nearby freeway and the westerly aspect of some balconies.”

Billbergia’s other major challenge came integrating the new residential facilities with existing rail, roads and shopping. This was further complicated by the close proximity of Sydney Olympic Park, which provides a real selling point for the development once finished, but created specific difficulties during construction.

“The nearby mangroves are heritage listed,” says Joel, “so the ecological regulation from Sydney Olympic Park Authority (SOPA) was some of the tightest we’ve encountered.”

There could be no acids on the site. All paints used had to carry the highest environmental ratings. The project managers had to be constantly vigilant about anything that soaked into the soil or overflowed into the bay.

“There has been a lot of environmental damage in the general area before the Olympics,” Trewhella says. “The whole area had an enormous clean-up for 2000. This particular area has not been too badly affected but SOPA’s mandate is to maintain the ecological integrity of the whole area, so this site has been scrutinised more than any I’ve worked on in 21 years.”

The project also features a pedestrian boulevard, 2 storeys in the air. “In many ways it’s my favourite part of the project. It adds so much to the precinct. It’s beautifully function. People will just use it without being aware of the design and construction that went into it, but if you have an eye for it, you’ll see how our architects solved the problems presented by the topography of the site.”

Wentworth Point is not the first Billbergia development in the Sydney Olympic precinct. They previously built Australia Towers and the lessons learned during that construction became valuable in the Wentworth Point build.

“With Australia Towers we learned so much about the ecological sensitivity of the area, which factored straight into Wentworth Point. That was one of the main reasons we completed such a complex project in just 17 months.”

When residents move into Wentworth Point Marinas, they’ll live in one of Sydney’s most picturesque locations. But they’ll probably be oblivious to the amount of care that went into its creation.

And that’s exactly how Joel Trewhella believes it should be.